In the episode, which can be viewed on complex.com, Neymar visits Los Angeles’ sneaker shop Fight Club to talk about the importance of sneakers as a fashion staple from his upbringing to uprising as a soccer sensation. 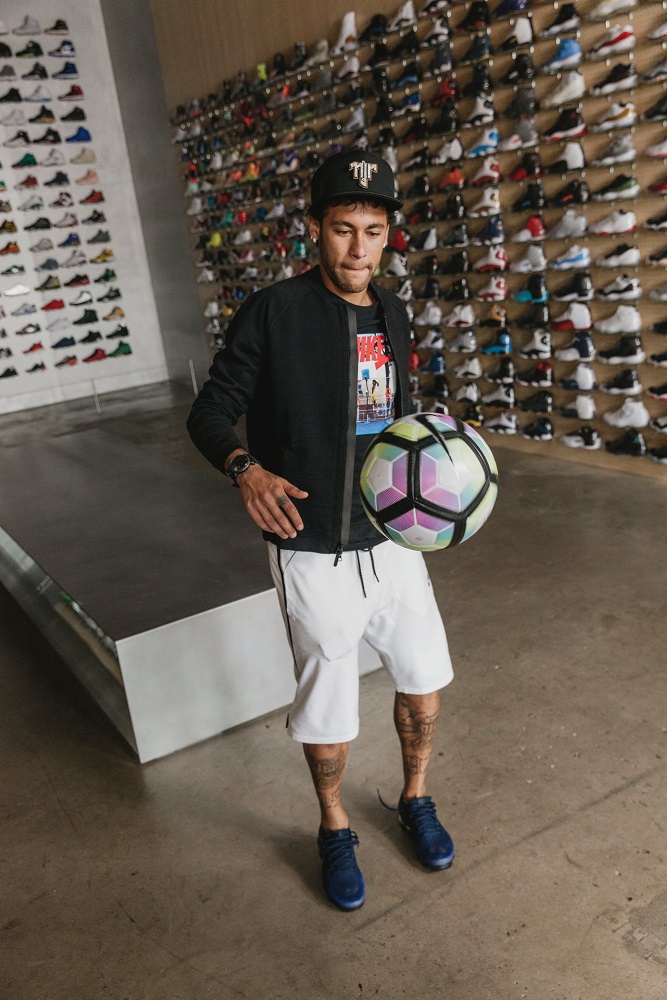 Neymar grew up in Brazil where the options for sneakers were limited. As a child, he exhausted his only pair of Jordan’s while playing soccer at school. Neymar wore his Jordan’s proudly, despite the numerous holes amassed from overuse. Eventually, Neymar had to retire his favorite kicks, but his original fashion sense and soccer stardom allotted him a partnership with Team Jordan where he created his own signature pair and also met Michael Jordan. “It was one of the happiest moments of my life. I was shaking when I met him,” Neymar recalled.

Neymar has had his fair share of celebrity meet-ups with sports stars and pop culture icons. Neymar recently played a match of soccer with teen heartthrob Justin Bieber. “He plays well. I was a little surprised…maybe he could play professionally,” Neymar explained. He also chatted with Odell Beckham Jr., both of whom signed deals with Nike. Regarding Odell, Neymar noted, “Odell is a great person, a great player. I really admire him.” Yet, Neymar’s fashion sense doesn’t correlate to either icon. When asked which sports star’s sneakers were his favorite, Neymar chose a pair of Nike LeBron 11 Elite SE’s, a flashy red pair with golden accents.

However, Neymar doesn’t regard his style as flashy, but rather unique. So unique, that his teammates often times tease him. Prior to a match, Neymar’s teammates saw him wearing a pair of Supreme x Nike Air More Uptempo’s; a pair of thick golden high-tops. His teammates threw his shoes in the bath, while he was in the changing room. “I wanted to kill them because I really liked the sneakers,” Neymar laughed. He takes his clothing seriously and even has an on-f ield fashion competition with fellow soccer player and friend Lionel Messi. The two often throw punches regarding the attractiveness of one another’s cleats. “When they look good we say, ‘You did well this time.’”

How To Prevent and Manage Sport Related Injuries

0
Melanie Heuberg September 1, 2017
No Comments Yet