That’s right! Billboard is standing behind Pandora’s watch list that was released in December 2017 by publishing the list. Pandora is a leader in digital trends, conducting a most comprehensive music analysis using scientific algorithms to predict which artists are most likely to hit the Billboard 200 chart for the first time within a year.

Pandora’s team of highly trained musicologists analyze hundreds of attributes for each recording, personalizing your experience.

The notable list of predictions is based on the likelihood of success, and many factors are taken into consideration, like growth on the platform, originality, cultural relevance, potential for growth and other data.

Tiana Lewis, Lead Pop Curator, shared that “From trendsetters to hit makers, we’ve been watching these hip hop and R&B artists create a buzz on Pandora. We analyzed street cred, crew love, industry insights, social data and plenty of vibe to pick our faves for 2018. Look out for these artists to make moves in the next year.”

Latin Pop sensation Christian Nava is a talented, young songwriter that shares the ‘we the people’ stories the old way, through songs. Each song is a story that’s coming to life with his piercing voice. Since the beginning of time and on every continent, people used to pass on history and stories using poetry and music. It was an art, and only a few would qualify to do that. Each country used such people to pass on their legacy. “Old-fashioned Pandora,” we might say. Nava could be called a Mexican balladeer, but he’s much more. His love of music took him further into a new genre that he’s creating by mixing new styles and delivery methods. Everything around us is evolving, including music. It is refreshing to see such a young man touching young souls and inspiring bi-lingual culture.

Nava’s family doesn’t have a musical background. His personal interest in music was a natural reflection of his soul. It all started for him at school and he was never thinking about becoming a professional musician, he just followed his heart.

Las Vegas became a home for him and his family. Originally from Napa, California, he was drawn to Las Vegas, which was more favorable to a young aspiring musician. 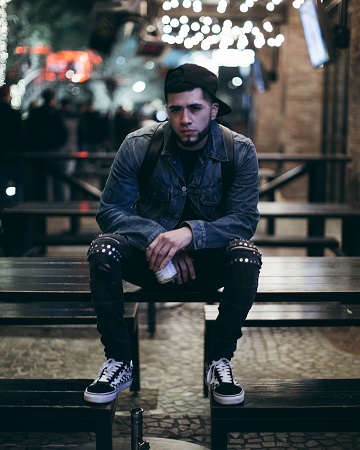 Music was taking up more of his time; he wanted to learn how to play the guitar and expand his skills. A key to success is to follow your passion. Music became his passion. Christian followed the lead of his passion, and it took him to a new heights. At first he was performing the classical Mexican genre; his Michoacán roots and influences are very strong. Since he was 16 years of age he has been writing his own songs. Now, at the age of 25, he has mastered his art and earned the love of his global fans. Nava has performed with big Mexican names like Banda Carnaval, Calibre 50, Banda El Recodo, Gerardo Ortiz (nominated by iHeart Radio Music Awards 2018 as Regional Mexican Artist of the Year as well as the Regional Song of the Year), and Remmy Valenzuela.

Starting from his first on-stage experience in Las Vegas that brought in over a thousand people, Christian is used to big crowds. His strong fan base keeps growing and expanding.

Christian’s individual vision evolved his personal style, and experimenting with many different genres of music brought him to finding his own. He’s a leader, not a follower, my friends. It is reflected in his hair cut, in his sense of fashion, in his lyrics, and in his music.

He is CHRISTIAN NAVA.

Pandora’s watch list reflects gifted and hard-working artists that will be impacting music for years to come. Well, Christian Nava is one. Remember that name⏤ and that you’ve heard it here first!

Full list of Latin Artists to Watch in 2018 http://blog.pandora.com/us/latin-artists-to-watch-2018/