“Havana 1920 celebrates my personal heritage, and with that, we created a place that really transports guests to Hemmingway’s Cuba,” said Joe Santos, COO of GBOD Hospitality Group, whose grandparents migrated from the United States to Cuba. “From music to décor to dishes and drinks to service, every guest is wrapped in the spirit Cuba.”

San Diego tourists and locals, alike are hailing Havana 1920, which opened its downtown doors in late 2017 in the city’s famed Gaslamp Quarter. Conceived by the GBOD Hospitality Group and with a kitchen helmed by Chef Anthony Porras, Havana 1920 exudes history—“channeling Cuba’s hay days when the island became a playground for Americans to escape prohibition and hit a happening bar scene,” as cited in its promotional materials. Here, Latin food lovers can bask in authentic and classic Cuban cuisine while sipping from the eatery’s impressive collection of more than 150 rums, including French-style Rhum Agricole, classic British Navy, and the hard-to-find Appleton Estate Joy. Also notable is the entertainment, as the restaurant boasts live and decidedly festive music nightly.

“Havana 1920 celebrates my personal heritage, and with that, we created a place that really transports guests to Hemmingway’s Cuba,” said Joe Santos, COO of GBOD Hospitality Group, whose grandparents migrated from the United States to Cuba. “From music to décor to dishes and drinks to service, every guest is wrapped in the spirit Cuba.”
To this I can attest, having dined at the locale myself. While the starter options abound, I appreciated the concise entrée selections: just four dishes this destination does exceedingly well. As an Empenada aficionado, I tried two of the three varieties available: beef picadillo and ham and cheese. The morsels, which came three to an order, had fittingly flaky and tender dough while the savory filling had big, hugely satisfying flavor. The Ceviche Tropical appetizer was equally amazing. This mélange of shrimp, grilled pineapple, jalapeno, cucumber, tomato, onion and cilantro was presented in a sweeter format than the more common acid-driven ceviches, which was a welcome departure, indeed. With it, I reveled in the authentic Cuban bread that Havana 1920 flies in from La Segunda bakery in Florida.

For my entrée, of the four I chose the Cuban Style Roast Pork, cooked classic Cuban style—marinated in traditional seasonings and cooked to tender pulled meat perfection. Of course, a side of black beans, white rice and fried sweet plantains accompanied. Portions here are appropriate—not overdone or gluttonous, but certainly enough to satiate.

Having been so enamored by my visit to Havana 1920, I sought out Santos to discuss what makes this eatery such an exciting and unique addition to downtown San Diego’s flourishing ethnic food scene. Here’s what he had to say.

How would you sum up the restaurant’s approach to Cuban cuisine?
Authentic. My grandparents migrated to the United States from Cuba; it represents my personal heritage. Havana 1920 is designed to transport guests to Hemmingway’s Cuba; to wrap you up in the spirit of Cuba. We have worked hard to create dishes and cocktails that incorporate ingredients and recipes that would make Grandma proud. 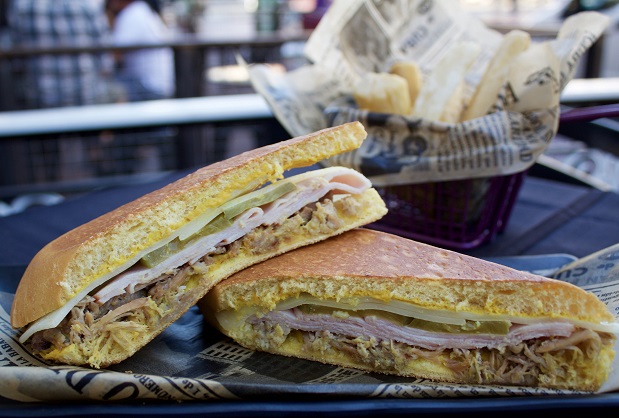 Tell me about the chef’s background – what are some career highlights?
Chef Anthony Porras has been working in the culinary industry for more than 14 years, with a wide variety of experience preparing different cuisines: Latin, Asian, Italian and more. He spent time working for Eurest Compass Group, which thrived in corporate dining, and has worked for companies including Pfizer, San Diego Gas & Electric and Qualcomm. He also worked at two hotels in San Diego County, first at Arterra Restaurant and Lounge in Del Mar, Calif. and at Park Hyatt Resort Aviara in Carlsbad, Calif. where he learned different cooking techniques from many talented chefs he worked under, and also served celebrities such as Jim Carey and John Madden, to name a few. He earned his culinary certificate from Grossmont College in 2006.

Does the restaurant have a “signature dish”?

Our signature item at Havana 1920 has to be the sandwich Cubano, made with slices of slow roasted pork, ham, Swiss cheese, pickles and mustard on Cuban bread served with yuca frita. It’s served on the Cuban bread from La Segunda Central Bakery in Tampa, Fla. It’s the bread that makes our version of the sandwich special, and lends itself to our passion for authenticity. The Cubano originated in cafes that catered to Cuban workers in Key West and Ybor City, Tampa, two early Cuban communities in Florida; it really is a “working man’s” meal.

What is your personal favorite item on the menu?
It is really hard to pick one favorite item. Right now it’s the Ensalada de Aguacate, avocado salad. It’s made with Caribbean avocados, tomato and onion on a bed of watercress with extra virgin olive oil, kosher salt and fresh lemon juice. It definitely transports you to the Caribbean with the first bite.

Menu aside, what is your personal favorite aspect of the eatery?
For me, it’s the ambiance. It truly transports me to another place. Guests reach the upstairs dining room by climbing a Cubana airlines stairwell lined with antique plane tickets and travel posters. The dining room is filled with homespun tables and mismatched chairs. You feel like you’ve left San Diego and have entered a home in Old Havana where you’ve sat down with family for a bite to eat.

What can patrons expect from dining at this restaurant?
Our goal at Havana 1920 is for everything the guest experiences – the food, cocktails, décor, music and ambiance – to take you on a journey to Cuba; Hemmingway’s Cuba that our grandparents lived in and experienced.

What other qualities set this restaurant apart from other dining options in the area?
In addition to being the only Cuban restaurant in the area, we’re very passionate about our entertainment and beverage program. Our décor really tells a story; it’s both unique and authentic with a variety of Cuban-style chairs, Cuban cigar boxes and a machine making fresh-pressed sugar cane juice for cocktails.

What’s new and exciting at Havana 1920?
We just launched lunch service on Jan. 8! A sampling of lunch selections, which are available starting at 11 a.m., includes classic Cuban croquettes filled with ham and béchamel or roasted chicken and béchamel; papa rellenas, mashed potatoes fried and filled with seasoned ground beef and peppers, or cheese and peppers; tostones, the Caribbean classic twice-fried green plantains served with Cuban mojo criollo and Havana Royale sauces; the sandwich Cubano, slices of slow roasted pork, ham, Swiss cheese, pickles and mustard on Cuban bread; and the Elena Ruz, a Cuban turkey sandwich with cream cheese and strawberry on a sweet Cuban roll; among other small bites, sandwiches and plates.

Beginning at 11 a.m., the ground level café will also serve a variety of cafecitos and espressos, including: Cafecito Cubano, the classic Cuban espresso served sweet and strong; a shareable version of the Cafecito Cubano, the espresso colada; Cubano cortado, Cafecito Cubano with steamed milk; Bombon, a combination of espresso and sweetened condensed milk; and Mexican mocha, a chocolate mocha with a kick of cinnamon and spicy heat.

What might people not know about the restaurant, but should?
First, our check presenters are actually cuadernos, school notebooks from 1940s Spain. They all have different animals on them, and our manager, Andrew Walsh, spent a lot of time and research to get them! Secondly, when it comes to the décor, one of our favorite pieces are the mini Bacardi rum bottles. Also notable is that we get our Cuban bread flown in from La Segunda Central Bakery in Tampa, Fla. La Segunda Bakery is a family-owned institution in the thriving Cuban district of Ybor City, Fla. that has been operating for 103 years.

Why is the Gaslamp District the optimal spot for this restaurant?
The draw of the Gaslamp gives us the exposure we love but mainly, we are the first Cuban restaurant (the first Caribbean altogether) in the area. It has been much needed.

What are some of your long and short term goals for the restaurant?
Our goals for Havana 1920 include consistency and expansion. We look forward to maintaining a high-level experience in every sense of the restaurant as we make this a flagship for this brand. 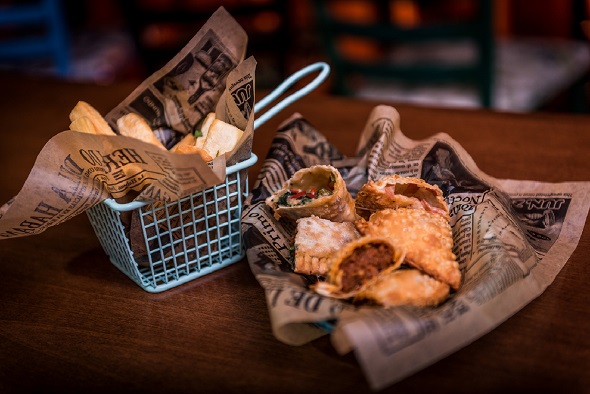 How will the restaurant maintain and/or elevate its image?
At Havana 1920, we don’t want to be stagnant – we hope to always be adding in new things and ideas. We also hope to expand to offer cigar rolling classes, rum tastings, salsa dancing and more. The idea is to keep things fresh and exciting, while also making sure to stay true to our concept.

Any interesting factoids about the restaurant?
Most of the décor is authentic to pre-communist Cuba and the 1920s, and belonged to my [Joe Santos] grandparents as well as a collector in Calle Ocho.

Accommodating up to 80 guests and designed by GBOD’s own design team led by Colin Mangold, Santos’ vision for Havana 1920 is now a noteworthy reality. The intimate, 1,000-square-foot restaurant and bar is filled with authentic touches, from the variety of Cuban-style chairs to Cuban cigar boxes and a machine that makes fresh-pressed sugar cane juice for cocktails. It’s truly great escapism in the heart of downtown San Diego.

As the Executive Editor and Producer of “The Luxe List,” Merilee Kern is an internationally-regarded consumer product trends expert and hospitality industry voice of authority—a travel, dining, leisure and lifestyle expert who spotlights noteworthy marketplace innovations, change makers, movers and shakers. She reports on exemplary travel destinations and experiences, extraordinary events and newsworthy products and services across all categories. Reach her online at www.TheLuxeList.com, on Twitter at www.Twitter.com/LuxeListEditor, on Facebook at www.Facebook.com/TheLuxeList and on Instagram at www.Instagram.com/LuxeListReviews.

Top 3 Colors To Wear This Season