Meet the A-Players in the real estate race to make Las Vegas great- again and again!

As with any throw down be it Iron Man vs Hulk, Foreman vs Ali, or the Washington Capitals vs the Vegas Golden Knights, there’s nothing like the thrill of watching two contenders match strength and strategy to victory. Today, we inaugurate a new kind of duel.

Round 1: Henderson vs. Summerlin

On the other side, reigning in at 35 square miles and covering 5 zip codes, this mountain range lined district runs 11 miles north to south. I give you the Master Planned Community, Summerlin, Nevada.

With palm tree lined streets, accessible freeways, and exploding property demand, from the outside, it can be difficult to tell the two premier real estate havens apart. High Rise Life takes a closer look at each territory to celebrate and compare their unique charms.

Between the two, Henderson was born first. In 1953, Henderson became an incorporated city within Greater Las Vegas and met its first mayor, Dr. Jim French. Starting with only 7,400 residents at the time, Henderson has now become home to over 300,000 people.

For those living and traveling to this “oasis in the desert” as Henderson’s Mayor Debra March calls it, the convenience of having the Strip minutes away is one of the many perks to enjoy. For our frequent flyer readers, Henderson boasts not one but two nearby airports: Las Vegas McCarran Airport and Henderson Executive Airport. It is also a hub for students and faculty. Education is one of the main arteries for the southern territory which is home to 2 state colleges, 9 private educational institutions and 10 technical colleges.

In addition to this already thriving community, “the Raiders stadium, their practice facility in Henderson, Union Village, and co-operative work spaces in Water Street District, just to name a few projects, will all cause surrounding housing to enjoy an injection of sales energy,” says Las Vegas Realtor Paul Benedict.

The City of Henderson estimates that the population will surge to 389,000 by 2035. With the economic uptrend, commercial and residential visitors alike are taking advantage of the resale neighborhoods. Simultaneously, commercial projects and developments continue to sprout and expand the city’s population and investor interest.

Henderson has also been awarded a spot-on Money Magazine’s list this year which recognized the “Top 50 Best Places to
Live in America.”

As of September, single family residences make up 86% of Henderson’s housing market. Below is a zoom in on a luxury zip code in Henderson: 89052 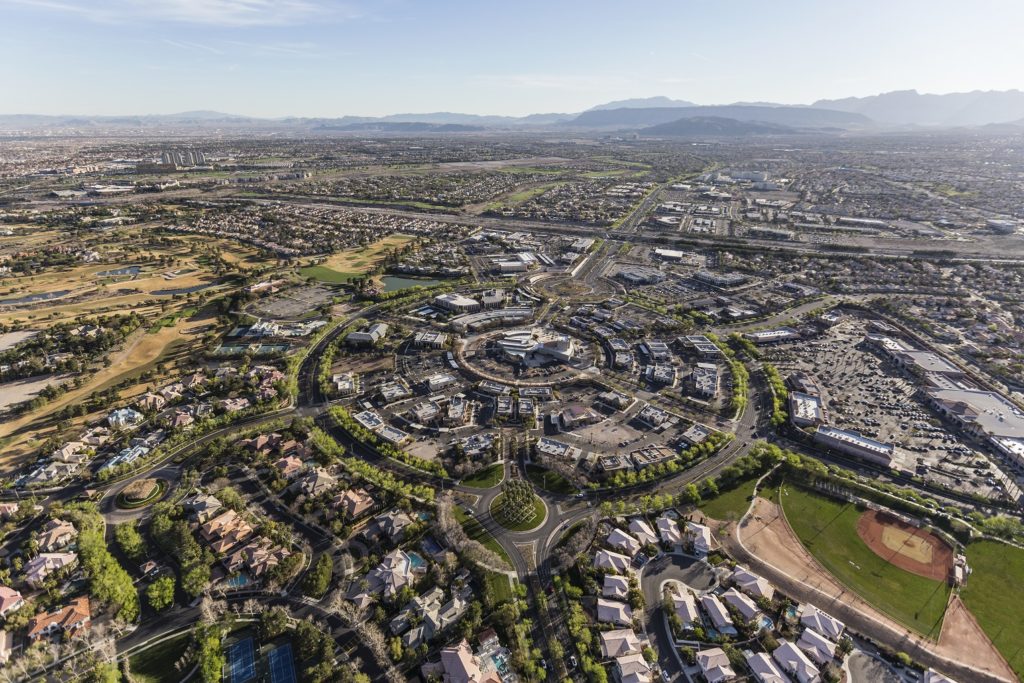 Contrary to internet sources, Summerlin is not a city or a municipality. Rather it is a large master plan community. Summerlin spans over 22,500 acres from Las Vegas’ north to south boundaries. End to end, it’s about 11 miles.

Born in 1988, Summerlin is a millennial. The master plan community was announced and named after Jean Amelia Summerlin, the grandmother of billionaire land developer and movie legend, Howard Hughes. Hughes, an acclaimed visionary and conservationist placed a 5,000-plus acre buffer zone along Red Rock Canyon with the intention of protecting the wildlife and Las Vegas’ natural desert landscape.

“Summerlin is just 15 minutes away from the action on Las Vegas Boulevard, yet feels a world away in terms of the intimacy and serenity,” notes Randy Char, President of Char Luxury Real Estate. He continues, “The success of Summerlin is more than just pretty construction. It’s a sense of home and vibrancy that never existed before.”

A hot market is not the only thing that Summerlin is sporting. The T-Mobile Arena ice rink is still on fire, since the Las Vegas Golden Knights scorched last season having made it to the Stanley Cup Finals in their first year as an expansion team. While the hockey stage and stadium on the Strip seats 17,500 people, visiting the practice arena is a way to get even closer to the game. Nestled in the mini metropolis of Downtown Summerlin is the official Golden Knights practice rink. Today, they boast a new academy for children allowing youth skaters and families to get in some ice time and expectedly, come together in anticipation for another stellar season. The opening game is on October 4th at the T-Mobile Arena.

In addition to the Hockey scene, Downtown Summerlin will soon welcome the highly-anticipated ballpark for the Las Vegas 51s, brought to you by the Howard Hughes Corporation. Due to open in 2019, the ballpark is estimated to cost a cool $150 million and will be able to hold 10,000 spectators.

The Downtown Summerlin area is a recognizable hub for shopping, dining, and recreational activity. Though with new facilities and commercial expansion across the northwest parts of Las Vegas, most of Summerlin has become a thriving place of business. Today, there are more than 22,000 employees. Offices that take up the high-priced zip codes include Wyndham Vacation, Life Time Athletic, and Le Cordon Bleu Culinary Institute. “There’s something for everyone here, and that in and of itself is spectacular,” says Randy Char, President of Char Luxury Real Estate.

For those interested in calling Summerlin their home, single family residences make up 78% of Summerlin’s total housing inventory since September. Below is a spotlight on Las Vegas’ highest priced zip code: 89135.

For years, the debate about whether one should live in Henderson or Summerlin has been spritely argued by locals and visitors alike. Yet contending to rule which is better is like choosing between the iPhone or the Android. After all, both Henderson and Summerlin possess strong communities and flourishing developments to support sustainable long-term growth. Take the time to consult with a real estate professional to understand which area suits you best.

Whatever it is that brings you to this fascinating city, we invite you to stay a while and play. The water is fine.

Iris is a Las Vegas based Realtor and Writer, with a childlike passion for stories and a great respect for the world we all live in.
Instagram: IrisTsuiRealty [email protected]

We want to hear from you, High Rise readers! Henderson or Summerlin?
#HighRiseLife