Developers and brothers Derek and Greg Stevens have officially unveiled plans for Circa Resort & Casino, a brand-new integrated gaming resort in Downtown Las Vegas, slated to open in December 2020. A welcome addition to the iconic Fremont Street Experience, Circa will bring a new energy to Downtown as the first ground-up resort development in the area since 1980. The innovative property will celebrate the timeless spirit of the city while leading the charge for a bold new era with game-changing guest offerings.

“There is a lot of unmet demand for fun in Las Vegas,” said Derek Stevens. “At Circa, our goal is to create a destination resort in a historic part of the city, while showing guests the time of their lives. We plan to double down on the world-class service Las Vegas has always been known for while bringing personalized experiences to a new level.”

Over the past decade, Derek has worked alongside Greg to develop several ventures, including the D Las Vegas, Golden Gate Hotel & Casino and Downtown Las Vegas Events Center. The duo’s investments have played a role in reshaping Downtown Las Vegas, attracting new waves of visitors and locals while leading the turnaround success story of “vintage Vegas.” Often found taking the time to greet and interact with visitors at his properties’ centerpiece bars, Derek’s genuine and approachable style of guest appreciation has challenged the status quo of resort ownership and earned the endearment of customers.

What’s in a name?

In the spirit of staying true to the city, Circa will deliver a new experience built on the original principles of old-school Vegas hospitality. It will mix the glamour of vintage Vegas with modern luxuries and cutting-edge technology, honoring the golden age of the city. Guests can expect top-notch entertainment while enjoying honest, attentive and friendly service.

Paying homage to the city’s vibrant history, Circa will nod to the Las Vegas legends of decades past, ranging from the visionaries behind the first gambling halls on Fremont Street to the preeminent destination resorts on the Strip. To learn more about the history of the Downtown Las Vegas neighborhood and its influence on Circa, please visit Circalasvegas.com.

Designed for those seeking the ultimate Las Vegas vacation, Circa will boast 777 rooms and suites, and a collection of thoughtful amenities, including a range of eclectic restaurants, the longest outdoor bar on Fremont Street Experience, a rejuvenating spa and a two-level casino with
state-of-the-art slot and table gaming options. Circa has collaborated with Steelman Partners to oversee architecture and design, Tré Builders as construction manager, and McCarthy Building Companies Inc. as contractor.

Circa will be home to a state-of-the art parking structure playfully dubbed “Garage Mahal,” specifically designed with
ride-sharing in mind. Catering to the growing use of Uber and Lyft, and housing 1,201 parking spaces, the centrally located
nine-story garage will be the first of its kind in Downtown Las Vegas, allowing guests to conveniently and efficiently travel to and from the property.

Another signature element will be a
multi-level, stadium-style sportsbook, equipped with the biggest screen in sportsbook history. The Stevens brothers recently announced a partnership with sports gaming media organization Vegas Stats and Information Network (VSiN) to bring an in-house broadcast studio to Circa. This will allow bettors to have in-depth analysis from a roster of experts including broadcasters, industry professionals and athletes.
Construction is currently underway on the 1.25-million-square-foot property, which will punctuate the Las Vegas skyline as the tallest tower north of the Strip. The resort will be defined by a bold design, accented by a backlit roofline and an expansive multi-tiered pool amphitheater. Featuring several pools and a massive screen with the latest high-resolution technology, the amphitheater will offer a unique
watch-party atmosphere for sunseekers and sports fans. The venue will be complemented by a delicious food and beverage menu, private cabanas and music from DJs and special guests.

Circa’s interior will welcome the return of a Las Vegas icon: Vegas Vickie, the kicking cowgirl who was once perched high above the Fremont Street Experience, will become a key design feature and must-see photo opportunity within the hotel’s lobby. 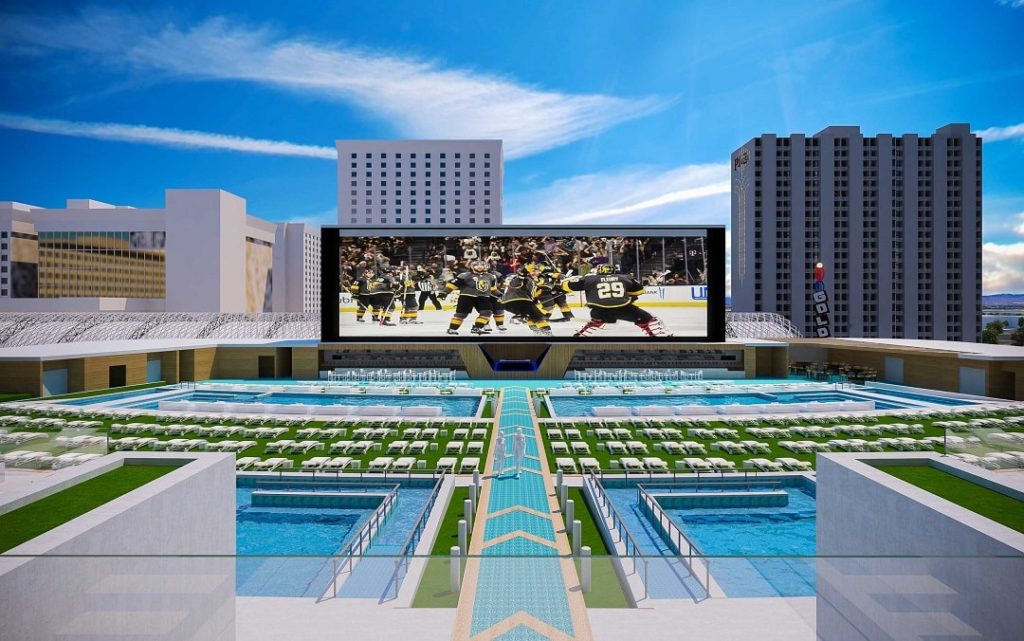 After months of speculation, Circa’s name, design and neon sign were revealed last night during an evening of festivities. After an appearance at the annual 2019 State of the City address, Derek invited attendees to enjoy an afterparty at Downtown Las Vegas Events Center, where he promised to unveil all-new details about the upcoming project.

Derek was joined onstage at Downtown Las Vegas Events Center by Las Vegas Mayor Carolyn Goodman during the public celebration. Among eager onlookers were a number of notable city and state officials, property executives, community partners and members of founding Las Vegas families including Freddie Sarno, son of casino developer Jay Sarno; Nevada Stupak, son of casino owner Bob Stupak; Michael and Brendan Gaughan, son and grandson of hotel and casino magnate Jackie Gaughan; and legendary bookmaker Jimmy Vaccaro. The grand reveal took place after a thrilling introduction video, concluding with the unveiling of a huge neon sign emblazoned with the property name that will eventually be a part of Circa’s exterior. Known in Las Vegas for his eclectic collection of custom blazers, Derek did not disappoint as he donned a custom tuxedo complete with a jacket displaying Circa’s logo.

Additional details about Circa’s amenities and opening will be announced in the coming months. To learn more information about the new Downtown Las Vegas property, visit circalasvegas.com.

Wine Gifts for Your Valentine

0
Contributing Writer February 7, 2019
No Comments Yet