San Jose claims the top spot for the second straight year, but Southern markets with growing tech economies make up half of the top-10 list of the hottest housing markets this year

San Jose claims the top spot for the second straight year, but Southern markets with growing tech economies make up half of the top-10 list of the hottest housing markets this year

The hottest housing market this year will be San Jose, California, according to Zillow, the second year in a row that Silicon Valley earns that distinction even as the winds are gradually shifting in the nation’s priciest housing market. Meanwhile, the South is drawing new residents seeking affordability and jobs in some
up-and-coming tech markets.
To find the hottest housing markets, Zillow looked for places where we expect home values and rents will outpace the nation in 2019, strong income growth, good job opportunities with low unemployment rates and a growing population.
San Jose has the lowest unemployment rate and the most jobs per person among the 50 largest U.S. metros, along with the highest home values and forecasted home-value appreciation. While other West Coast markets – most notably Seattle – have slowed down, San Jose continues to see double-digit home value growth. It has led the country for home value appreciation, which it should do again during the early months of 2019, though the market is doubtlessly facing headwinds. For-sale inventory in San Jose has doubled in recent months but remains tight. It also ranked highly for income growth, with the typical household income growing by 6.8 percent.

Five of the hottest markets are in the South, where housing is more affordable, drawing in new residents. Median home values in Jacksonville, for example, are one-sixth what they are in San Jose, and rents are about one-third the price. Orlando had the biggest population increase of the hottest housing markets, up 2.8 percent.

The impact of the tech industry on housing is also apparent on Zillow’s list. Along with the San Francisco Bay Area markets of San Jose and San Francisco, four metros (Atlanta, Dallas, Denver and Nashville) in the top 10 were finalist markets for Amazon’s HQ2 and have growing tech industries.

“When it comes to the country’s hottest housing markets, long-time leaders are hard to displace, but a number of up-and-comers are nipping at their heels. Silicon Valley’s white-hot jobs market has propelled the region’s housing market – which we expect to continue into the early months of 2019 – but there are some signs that the trend is away from the West Coast and toward the South and Southeast,” said Zillow senior economist Aaron Terrazas. “Affordability is attractive for both young professionals and booming businesses, earning markets like Orlando, Minneapolis, Dallas and Nashvilletop billing in 2019.” 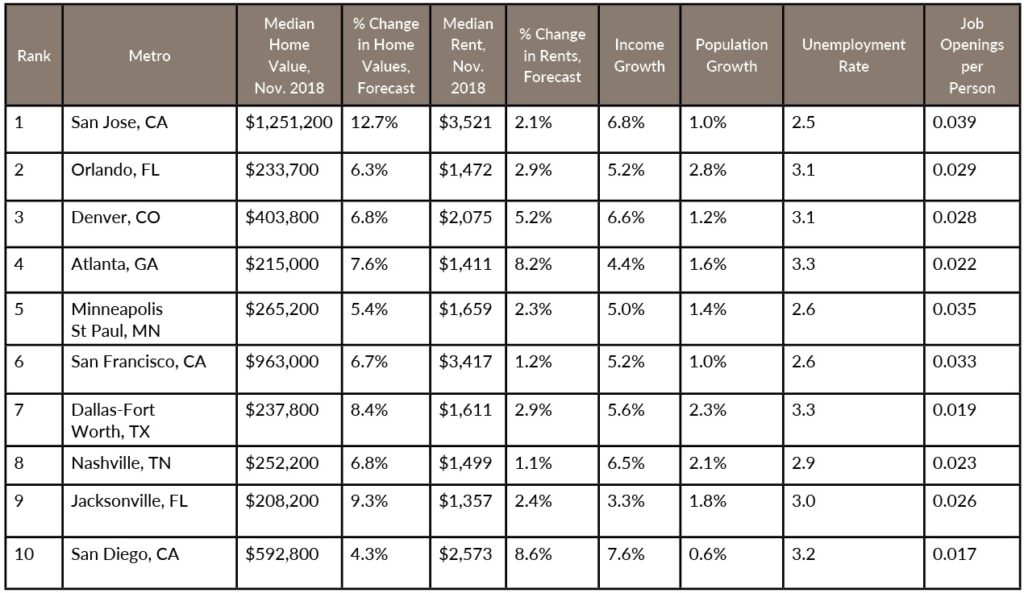 Zillow used six variables to determine the hot market rankings: Zillow’s forecast for the change in the Zillow Home Value Indexi and Zillow Rent Indexii over the next 12 months, recent income and population growthiii, current unemployment ratesiv, and the number of job openings per person using data from Glassdoorv. Those six variables were then scaled for the 50 largest U.S. metros and combined to produce the top 10 list.

0
Contributing Writer February 14, 2019
No Comments Yet