In honor of a career championing equality and inclusion, global cruise line
donates $40,000 to Oprah Winfrey’s Leadership Academy for Girls in South Africa

At a special gathering on board Nieuw Statendam following the special Girls’ Getaway sailing in partnership with O, The Oprah Magazine, Holland America Line bestowed its Shared Humanity Award on Oprah Winfrey — philanthropist, global media leader and founder and editorial director of the magazine. At the event, Holland America Line presented a $40,000 donation to Oprah Winfrey’s Leadership Academy for Girls to commemorate the award and honored her as official godmother of the new ship.

Holland America Line chose Winfrey for her commitment over the last three decades to bringing people together, breaking down barriers and inspiring greater understanding among people from all backgrounds, belief systems and walks of life.

“Oprah has worked tirelessly throughout her career to enrich the lives of others, and she is globally recognized as a leader who has inspired millions to live their best lives and embrace that we are more alike than different,” said Orlando Ashford, president of Holland America Line. “Oprah embodies the spirit and reason why we created the Shared Humanity Award, to reflect our higher purpose value of building connections and fostering understanding among people from different cultures as we sail the world. Oprah is exceptionally deserving to be honored and we are proud to support her work with a donation to Oprah Winfrey’s Leadership Academy for Girls in South Africa.” 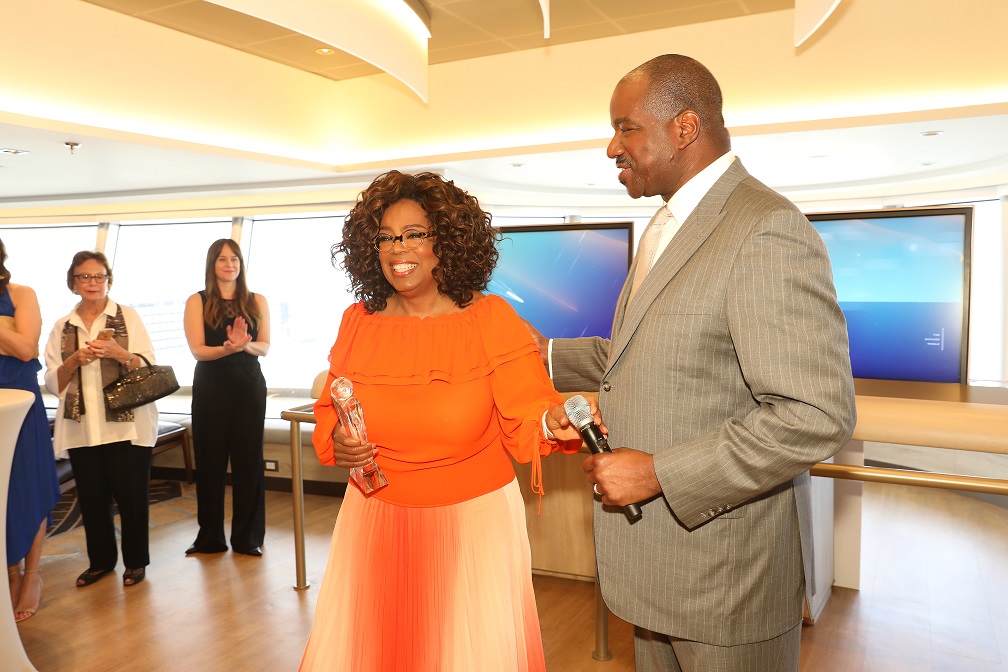 Winfrey’s generous impact to the world began in 1998 when she created Oprah’s Angel Network that supported charitable projects and provided grants to nonprofit organizations around the world. Oprah’s Angel Network raised more than $80,000,000 before ending in 2010. In 2000, during a visit to Nelson Mandela, Ms. Winfrey pledged to build a school for girls in South Africa to serve girls who showed outstanding promise despite their impoverished backgrounds and social circumstances.

By 2012 Winfrey had donated approximately $400 million to educational causes, including more than 400 scholarships to Morehouse College in Atlanta, Georgia. In 2013, Winfrey became the biggest single donor with a contribution of $13 million to the Smithsonian’s National Museum of African American History and Culture.

“I’ve spent my life trying to be a missionary and a visionary of spreading peace in the world. The one prayer that I pray most often is ‘God, use me for something greater than myself,’” said Winfrey in accepting the award. “There is nothing better than having acknowledgment that the work that you are doing is being affirmed by people who notice what you do. I appreciate that from you. Thank you very much and I’m grateful for the contribution to Oprah Winfrey’s Leadership Academy for Girls.”

Born from a pledge by Oprah Winfrey to former South Africa president Nelson Mandela, Oprah Winfrey’s Leadership Academy for Girls is committed to providing a rigorous yet supportive education system that encourages high standards of academic achievement, service leadership and provides cultural enrichment for girls who show outstanding promise, despite their disadvantaged backgrounds. As of 2018 more than 430 OWLAG graduates have attended colleges and universities around the world, with 17 of those girls graduating from U.S. colleges and universities.

0
Contributing Writer April 7, 2019
No Comments Yet