Spectators wowed as they saw FORTUNA Tokyo’s 2020 Spring-Summer collection presented on the runway during the New York Fashion Week on September 6th, 2019.
Fashionistas from around the world gathered in Manhattan for the New York Fashion Week, which occurred from September 6th to 11th, 2019. Young Paris, a model and artist from Roc Nation Act, kicked off FORTUNA Tokyo presentation, the top batter for Flying Solo’s fashion show that took place at Pier 59 Studios. 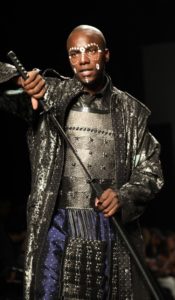 Marking his runway debut, Young Paris sported a samurai inspired look from FORTUNA Tokyo. The crowd gasped with excitement as he pulled out the samurai sword swiftly. Following him was actress and model Eugenia Kuzmina, who made appearances in Hollywood movies such as “Elysium” or “Dirty Grandpa” walked wearing a samurai kabuto.

The new collection “Samurai History” opened and closed with a Japanese sword carried out by samurai models. For each piece, Kyoto’s Nishijin Kimono Textile and Tango Chirimen is incorporated, giving contemporary look of samurai history. FORTUNA Tokyo took the audience on a ride back to the ancient times of Japan from the 8th to the 18th century, where Samurai’s and sword fighting’s dominated the Japanese society.

With celebrities such as Gigi Hadid, Cardi B, and Natalie Portman as clients, Flying Solo has certainly breathed in a new air to the industry by assembling emerging designers from around the world. 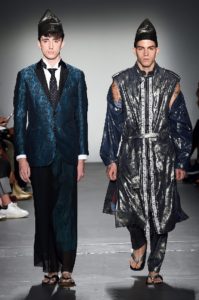 A little-known fact, Flying Solo approached FORTUNA Tokyo a month before the actual show to present their newest collection. Curious of how the brand managed to prepare such a mesmerizing collection within the strict time limit, we interviewed Akiko Koba, the Creative Director of FORTUNA Tokyo, to hear how it all went down.

Designer Akiko Koba said, “FORTUNA Tokyo’s brand mission is to raise awareness and preserve traditional Japanese craftsmanship by spreading it to the world through fashion. In New York, there are many people who challenge themselves and fearless dive into new genres and create something unique. I couldn’t have imagined a better place to start off our global expansion.”

“The point that I struggled the most was the process of incorporating historical elements of Japan to each piece of the collection. Many established designers have tried so in the past, but for FORTUNA Tokyo, the challenges lied in how that can be given a modern twist,” Akiko added.

“In addition to traditional designs, this collection used materials with the latest technology such as ‘Nishijin Carbon’; which was provided by the Fukuoka Industries (Kyoto / Nishijin). Without the cooperation of the people from the Nishijin region in Kyoto, the samurai outfit could not have been completed. I am happy that the wonderful technology of Nishijin Kimono Textiles was viewed and praised on a global stage, ” Akiko concluded.

Along with Paris, London, and Milan, New York is one of the “Big Four”; cities that exhibit the most prominent fashion weeks around the world.

0
Contributing Writer November 5, 2019
No Comments Yet