HOFA Gallery is greatly saddened by the passing of the legendary and iconic British photographer, Terry O’Neill CBE.

HOFA Gallery auctioned one of the works from the collection and donating the proceeds to the Prostate Cancer UK. 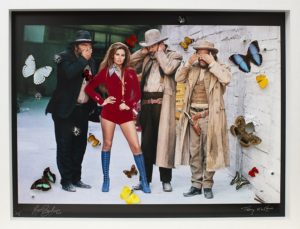 The ‘Hollywood Reloaded’ collection recently launched at Annabel’s to critical acclaim. The exhibition is a bold and brash reinvention of Terry O’Neill’s portraits of Hollywood icons posing with guns. Portraits of stars like Michael Caine, Brigitte Bardot and Roger Moore, each with a sleek firearm in hand, are pockmarked by bullets fired by ex-Special Forces turned artist and reportage photographer, Bran Symondson, using the same gun as in each portrait. Guns and the violence they symbolize become subjects, displacing Hollywood stars and the glorified ethos they mediate as well as create. 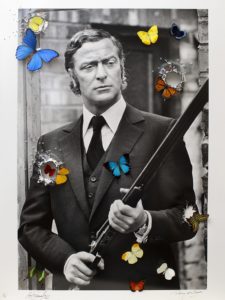 Before his passing Terry said of the collaboration: “What Bran has done with my photographs is astounding. He’s taken such time and consideration when creating his art – he really has transformed my photographs into something entirely his own. It’s been a thrill for me to work with a young artist such as Bran, to listen to his thoughts and process. And I can’t be more pleased with the results.”

Bran Symondson said about Terry on hearing the news, “He was a photographic legend, so being given the chance to work with him, especially on his last exhibition, will remain my life’s biggest honour.”

He adds, “My only wish is that I could have met him sooner in life, he had so much to give.”

HOFA Gallery and Symondson extend their profound condolences to Terry’s family and close associates. They are deeply proud to have had the privilege of working with Terry on his last exhibition. As many who have worked with him will attest, he had a kind, warm and endearing personality which carried over in his work and relationships with the celebrities he photographed.

0
Contributing Writer January 14, 2020
No Comments Yet