Look inside The Mayfair Supper Club defying typical dinner service with an immersive and evolving entertainment experience centerstage of the Bellagio Fountains in Las Vegas.

The Mayfair Supper Club’s classic Martini at Bellagio served with a choice of olives, twist or onion. 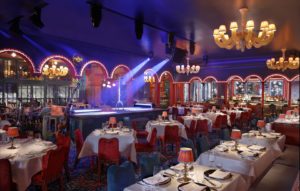 Captivating guests with live entertainment, surprise performances and a coveted location overlooking the iconic Bellagio Fountains, The Mayfair evolves from a swinging prohibition-era jazz club to a late-night dance party. Guests are transported to the glamorous supper club world of yesteryear when music and cuisine intertwined in an all-night destination.

Through a multi-act production by No Ceilings Entertainment and its creative team, The Mayfair defies typical dinner service with not only live music, but immersive,
full-scale productions on stage and throughout the restaurant that make guests feel the show all around them.

“Supper clubs of the mid-1900s were the foundation for our country’s best artists and cuisine, which The Mayfair celebrates and modernizes for the 20s of today,” said MGM Resorts International President of Events and Nightlife Sean Christie. “Combined with spectacular entertainment overlooking unrivaled views of the Bellagio Fountains, The Mayfair delivers an experience that can’t be found anywhere else in the world.”

The stunning space by London and New York-based Martin Brudnizki Design Studios draws inspiration from the whirlwind glamour of old Vegas and Hollywood, and The Mayfair’s waterfront locale. Guests are brought into a world inspired by mythology and tales of Neptune with elements such as a statement bar with a sea-green Murano glass canopy, coral-inspired wall lights, scalloped-edge banquettes, and a ceramic shell wall. Textures and colors are richly layered to create a decadent and sophisticated backdrop for an evening of dining and dancing. 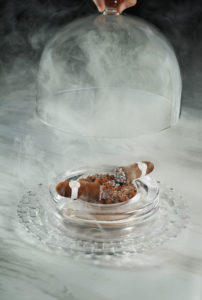 A Glimpse into The Mayfair

•Menu. Indulgent appetizers kick off the night starting with the Wagyu Handroll with Caviar layered with horseradish cream, tonkatsu sauce and a glittering gold leaf. Headlining the evening are quintessential American entrees prepared tableside like the Mishima Farms Wagyu Prime Rib, which is slow roasted for seven hours. The Mayfair’s curtain call features whimsical delights and visual extravaganzas exemplified by The CIGAR, an edible chocolate and hazelnut cigar showpiece that arrives hickory-smoked under a glass cloche.

•Cocktails. The Mayfair introduces theatricality to American paradigm cocktails such as the Lemon Drop, topped with a citrus bubble that pops and releases scents enhancing the flavors of the drink. Additionally, four champagne cocktails are served with a split of Nicolas Feuillatte Champagne to keep the libation flowing, such as the Julep made with Hennessy VSOP, apple cider syrup, burnt cinnamon and mint.

•Nightly Entertainment. Entertainment evolves throughout the evening and the week to deliver new experiences for guests each time they visit. Dinner service begins with a world-class pianist filling the venue. As the sun sets, the energy rises with performances reminiscent of the showroom era of Las Vegas entertainment. The Mayfair’s lead vocalists transport guests back through history with a multi-piece band to dazzle diners. As the evening continues, The Mayfair explodes with performances that immerse guests in the rule-breaking era of prohibition supper clubs with every performer, bartender and waiter joining the production.

•Mayfair After Dark (Friday-Saturday from 11 p.m. – 3 a.m.). As the curtains close on traditional dinner hours, the vibe shifts for a fresh take on Las Vegas nightlife. Live musical acts and performances illuminate the evening for an all-night dance party. A late-night dinner menu featuring a variety of delicious offerings from steak and sushi to salads and desserts is available until 2 a.m.

0
Contributing Writer February 13, 2020
No Comments Yet