Radmila Lolly is the sole designer of the couture fashion house “Radmila Lolly” and a singer of alternative classic music.

She creates a unique combination of her music with her fashion creations. Radmila most recently released her album “Wonderland” and complementary couture collection during a night of opera and fashion at Carnegie Hall. The collection has since been featured at Barneys Madison Avenue Trunk Show, alongside designers such as Zac Posen, Naeem Khan, J. Mendel, as well as at the Daytime Emmy’s Ceremony. It has been featured by Vogue Italia, Harper’s Baazar, and more. A number of celebrities have worn Radmila Lolly collection such as Gayle King, Bebe Rexha, Mya, Miss Universe 2018, Miss USA 2018, Miss USA 2017, to name a few.

But not only Radmila sings and designs, this talented artist has upcoming ventures that include a novel that corresponds to her next self-composed album and high couture collection. 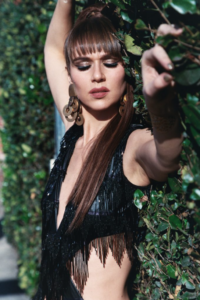 Lolly’s mom is a Russian painter, which is where Radmila learned her design sketching skills from; growing up she thought that she would be an artist too and had Sunday art sessions. Her grandmother was a seamstress and passed that knowledge along to her mother, which she taught to Radmila; she started by making her Barbies and dolls clothes, by the time she was 18, she was sewing and designing her own clothes. The combination of the art and sewing knowledge enable Radmila to create her haute couture.

Lolly formally appeared on the music scene with a triumphant debut album “IV Stories at the Standard Hotel Op.6” with the avant-garde, electro-acoustic “Scorchio” string quartet which she premiered during an exclusive gala concert at Carnegie Hall, which was attended by the likes of Grammy-winner, Maxwell. Radmila followed-up the album with an eclectic mix of singles which showcases her range and captures her voice in all its decadent glory. Her musical explorations include electronic & contemporary genres.

You have also heard her music as the soundtrack for the movie “Honor Up” directed by Damon Dash and with executive producer Kanye West, Works with Mar Vista Studios. The singer will be working on more soundtracks this upcoming year. Her upcoming album is the soundtrack to her upicoming novel and audiobook.

All the above, are a good explanation of her 319K Instagram followers. Follow her @Radmilalolly to keep up with her work and life!