The U.S. luxury housing market defied gravity in May, outpacing the rest of the market in price growth and views, according to realtor.com’s Luxury Housing Report released today. Like the rest of the market, inventory remains the biggest obstacle as home buyers shift their focus from dense urban metros to smaller less populated areas.

“The COVID-19 pandemic has reinforced the resilience of the housing market and unlike prior downturns, the luxury market is leading the recovery,” said realtor.com®’s Chief Economist, Danielle Hale. “Stay at home orders and social distancing have put a new value on the extra space. We’re seeing this in the luxury market as well, which could mean there is renewed interest from high-end buyers to find a second-home that is within driving distance from their primary residence.”

Luxury market at a glance

With just 25 of 94 luxury markets tracked by realtor.com showing listing price growth increases since January, the COVID-19 pandemic has slowed price growth in the luxury sector, which was up 15 percent at the start of the year. This compares to 60 counties during the same period a year ago.

Although inventory rebounded from historic declines in April, million-dollar listings were still down 15.6 percent year-over-year in May. In line with the overall housing market trends, luxury sellers began coming back to the market with new listings for homes priced above $1 million down just 15.1 percent year-over-year in May, compared to 57.8 percent in April. Homes priced over $1 million sold in 89 days in May, compared to 71 days a year earlier.

A second home appears to be in vogue for luxury shoppers

Much like the suburbs are gaining favor with home shoppers, second home markets are seeing increased interest from luxury buyers. Suffolk County, N.Y., home to The Hamptons, Palm Springs in Riverside County, Calif., and Greenwich in Fairfield County, Conn. all second home markets ranked among the top five markets with the largest increase in listing view growth in May. Views of luxury properties accelerated 56 percent in The Hamptons, 28 percent in Palm Springs and 24 percent in Greenwich compared to January trends.

In contrast, Honolulu, Key West, Fla. (Monroe County), Pebble Beach, Calif. (Monterey, Calif.) and ski towns in Eagle and Summit counties in Colorado have all seen interest in luxury homes wane since the start of the year.

With New York becoming the epicenter of the coronavirus in the U.S., luxury buyers focused their attention beyond the dense urban setting of the five boroughs. The Hamptons saw listing views increase 72 percent in May year-over-year, while views of luxury homes in Union, Bergen and Somerset counties in New Jersey increased by 40, 30 and 28 percent respectively during the same period. These counties were seeing views per property grow between 10 to 21 percent prior to the pandemic.

Despite the increased demand outside of the city’s five boroughs, Manhattan, Brooklyn, and Queens all saw luxury prices remain steady in May compared to a year ago. This is actually an improvement over pre-COVID conditions when the luxury prices in the boroughs were declining slightly. 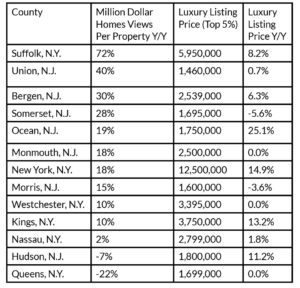 5 Remodeling Tips from the Pros