Are you familiar with the story of the “elixir of life”? The mythical concoction grants the drinker eternal life and youth while being able to cure all diseases. Throughout time people have searched for the fabled elixir of life. It has been said that ancient emperors of China sent thousands of travelers in search of the elixir all of whom were lost and never returned. Well the search is over because it is now commercially available, more popular than ever, and we call it kombucha. Kombucha, a fermented tea beverage, has exploded with sales and growth in the United States and Europe over the past decade. Kombucha’s health benefits are diverse but best known for promoting a healthy digestive system as well as detoxifying the body.

THE ORIGINS OF KOMBUCHA

The origins of kombucha can be traced back to 220 B.C. in northeastern China where the drink was considered to have medicinal value. Several hundred years ago the recipes eventually made its way north arriving in Russia where it is still brewed today.

Kombucha did not become popular in the United States until early 2000s. One of the first national brands was GT’s Kombucha. The man behind the company, G.T. Dave, claims that kombucha cured his mother of cancer in the 1990s.

Research conducted by Zion Market, a consulting firm, indicated that Kombucha sales were valued at $1.06 billion in 2016 with estimations that sales could climb to $2.5 billion by 2022. Even major brands like PepsiCo have capitalized on this grown when in 2016 they purchased KeVita kombucha brand.

Kombucha is made only from four ingredients: water, sugar, tea, and SCOBY (symbiotic culture of bacteria and yeast) and is fermented for seven to 30 days. The result is a slightly effervescent beverage made from the fermented black or green tea that tastes both sweet and tart. The tangy flavor is a result of the fermentation process and because it is fermented there are trace amounts of alcohol in the brew. 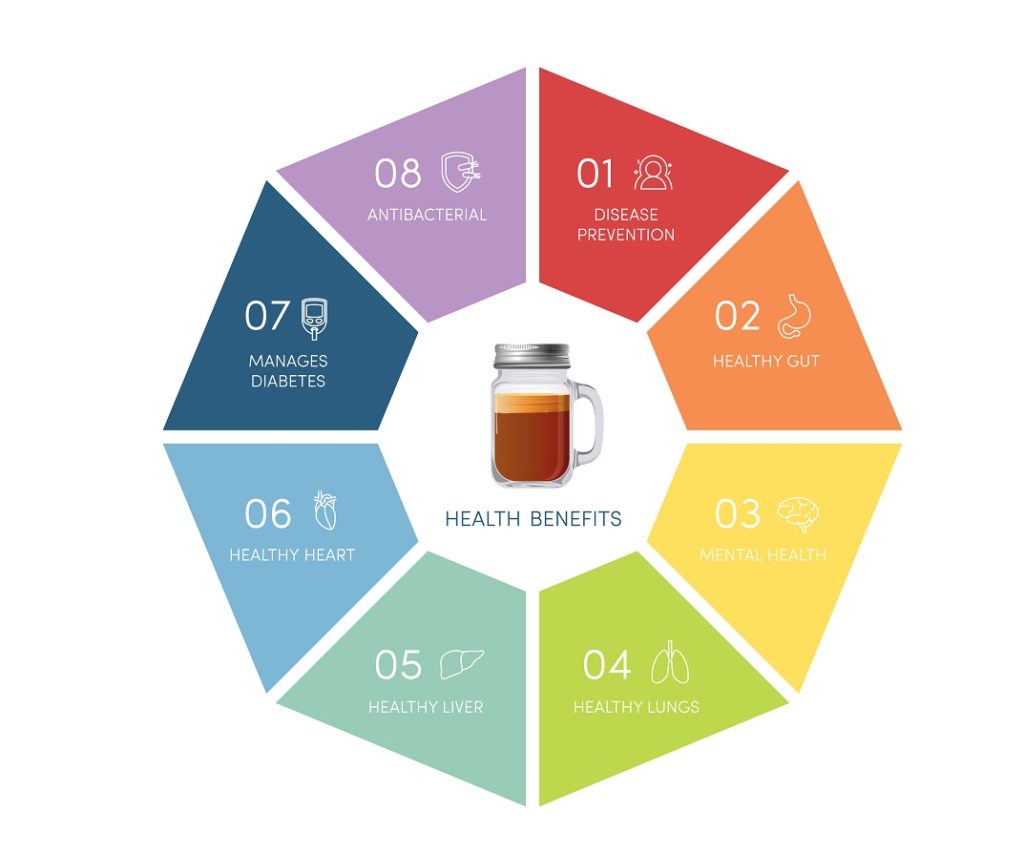 There are some distinct health benefits to drinking the fermented tea with its positive effects on digestion. Unlike most probiotic supplements, kombucha contains living bacteria and yeast which are responsible for promoting “healthy gut flora”. The gut flora or “probiotics”, the colloquial term used to describe the approximately 160 strains of bacteria we have in our digestive tract, is collectively known in the medical community as the “microbiome”. For several decades science has understood the importance of gut bacteria as an essential component to digestion, but more research has suggested these bacteria play a far more important role. For example, they break down toxic compounds that would otherwise be absorbed into the bloodstream. It is the promotion and support of these probiotic bacteria in one’s gut where kombucha derives its health benefits.
While probiotics are responsible for healthy and efficient digestion, there are a myriad of spin off health benefits beyond simply better digestion. It has been said that the more efficient digestion by kombucha leads to better nutrient uptake thereby leaving the drinker in a state of improved mental clarity. And akin to G.T. Dave’s claims, the healthy bacteria more efficiently removes toxins and carcinogens ingested thereby reducing the risk for cancer.

HOW TO DRINK KOMBUCHA

Kombucha is best consumed cold or slightly chilled. When it is left in the sun or ambient temperature for too long, it wakes the dormant and living yeast cultures which begin the fermentation process again. If allowed to sit for a long enough period of time, the bacteria and yeast in the culture can spoil or grow to levels that are not well tolerated by the human digestive system.

Most notable about drinking kombucha is how it should be decanted from the top of the bottle. At the bottom of a bottle of kombucha sits the scoby and it is not recommended that this culture be consumed. Do not shake or swirl the bottle as it could disrupt the scoby bringing it to the surface. For best results, decant the beverage from the top discarding the remaining last few ounces with the scoby.
So is it truly the “elixir of life”? While it is unlikely the millions drinking kombucha today will live forever, it has many health benefits that should make it a regularly stocked beverage in your refrigerator.

Paolo Murano is a world traveler, writer, and an entrepreneur based in Downtown Las Vegas. He is a firm believer in sustainable urban living. His favorite beverages are kombucha and sauvignon blanc.